Interface design, instructional design, usability, interface specialists etc… the list goes on. Everytime I pick up .net, edge or elearning age I’m likely to be reading about a particular job role, all of which are ultimately to do with creating a design that a user or learner will use.

In recent months we’ve been looking at delivery of elearning content on handheld devices and I went to an excellent elearning network presentation where a developer from a large corporate bank presented on how they had created a new set of guidelines for development on the blackberry. When they started out they simply used the same model as they had for traditional content platforms. The user group was quick to respond to user questionaires making it clear how they used their blackberry and how they wanted content to be presented. There was also a really interesting piece of feedback about the length and type of content that they wanted to be presented with. The bank listened, made changes, re-deployed and the project was a success both in terms of learner engagement and test results.

Over recent months some of you may have followed our tweets and blogs posts about the iphone. Today we have had our developer approval through from Apple. There was quite a bit of paperwork but it was a reasonable straightforward process, although I was a bit surprised when asked to fax some documents over to Apple. Find fax, power cable, phone cable, manual, remember how to operate fax, fax, has it gone? Anyway the fax obviously got their and its all been approved. Whilst all this was going on Ed and I have been downloading apps, games, gps devices and really road testing the iphone. We’ve used it overseas, in the country, at festivals, meetings, offices, cities – it’s performed well in all situations (this is starting to read like a car review!. As we downloaded more and more apps we noted how so many of the apps just followed the basic design principles as laid down by Apple, but every now and then we’d come across something that just wasn’t right.

…well, it didn’t seem right. What appears to be happening is that some developers are designing apps that don’t follow the traditional interface model. There are no guidelines or documents that you must follow but the basic model of how things work is now so familar that anything other than this tends to throw you out.

Let me give you an example. 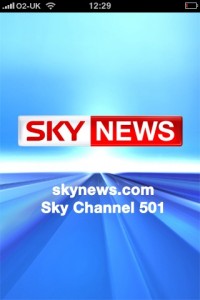 such as the guardian. I download the Sky news app. Nice layout, quite similar to lots of other news sites: 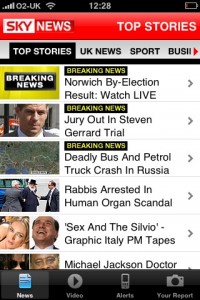 You’ll notice at the top right that it says Busi. I’d expected the interface to work in a similar to other apps that I’d used across the iphone and for several days I thought the app had crashed! Many people reading this might think I’ve just been a bit slow or just not got the hand of it but I think differently. There are so many people that I know who just would never ever get to this hidden content. There is content that you just don’t know exists until you work out how the sky news navigation model works. I tried re-starting, clicking on the arrow, clicking around the screen until…one day…I worked out how to get to the hidden content by accident! I just threw my finger across the menu bar and found this! 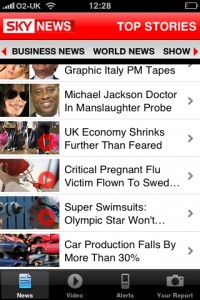 more content, loads of content! A really good consise news app with lots of hidden content. I know how to use the app although I sometimes get a bit stuck on the slide move!

I think the sky news app is great for news. Its realiable, loads quickly and has a good selection of news for when you are on the move. I just thought that this was a good example of delivering an interface that is not what the user group is used to. Then again I might be the exception and everyone else know’s how to use it.

If you are interested in reading more about this topic then check out this article from Smashing Magazine.

I have designed and delivered e-learning projects for the public and private sector in the UK and overseas. At the moment I have a specific interest in game based learning and theory within e-learning. In addition to e-learning I have also worked in IT strategy delivering Business Continuity and Business Improvement programmes in the Media and Energy sectors. My style is to provide the bridge between initial ideas and technology in a style that all team members can understand. I have been featured in The Financial Times and spoken at Learning Technologies and events organised by the Association of Learning Technologies, Norfolk Network, Norwich University of Creative Arts and The University of East Anglia
View all posts by admin →